Calasiao Childrens Chorus is holding a FUNRUN on May 5, 2012 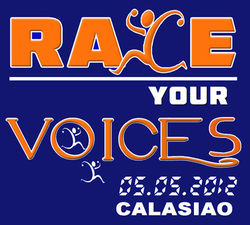 The Calasiao Children’s Chorus embarks on a greater challenge, as the group is set to compete in the 1st Xinghai Prize International Choir Championship to be held in Guangzhou China on November 8- 14, 2012. This is the Grand Prix Series, open only to “choir champions” in the different musical events organized by Interkultur Foundation across the world.  Indeed a very rare opportunity given to a selected few.

The cost of competing in China is very high. We have to raise approximately ONE MILLION TWO HUNDRED PESOS ( Php 1,200,000.00) for the airfare, board and accommodations, costumes, and training of 35 children. However most of the members lack the financial capability to shoulder the full cost of competing in China. Hence, we are launching the “CCC Dreams of Gold Fund Raising Campaign”a series of fundraising activities to support their upcoming competition in China.

One of our upcoming project is “ RACE YOUR VOICES” ,a fun run for the benefit of the CalasiaoChildren’s Chorus, which we plan to host on a Saturday of May 5, 2012 at 5 in the morning. Proceeds from this event which aims to attract about 2000 participants will go to the children’s choir fund for international competitions.
Registration is already ongoing. Please mark the date, Race Your Voices, May 5, 2012Calasiao, Pangasinan. Run and help send the Calasiao Children's Chorus to the 1st Xinghai Prize International World Choir Championships in Guangzhou China this coming Nov. 2012. Their honor is your honor too..

The governor hailed the group for making the province and the country proud. He was treated with some of the group's winning production numbers during their courtesy call yesterday at the provincial Capitol.

The children's chorale, composed of 21 youngsters from the town of Calasiao with ages ranging from 7 to 16, won the nod of the jurors with their rendition of selected Philippine songs that include tribal songs and medley of Pangasinan folk songs in a 25-minute performance onstage.

Gilbert Allan Dispo, choir conductor, said that the support of the provincial government brought the morale of the children to high level during the conduct of the competition.

Meanwhile, Leo Hugo, assistant choir conductor, said that the winning edge of the group might have been credited to the way they performed their repertoires especially their facial expressions.

It will be recalled that the provincial government through the Pangasinan Provincial Employees Cooperative (PPEMCO) conducted a fund-raising project via a Bingo Caravan to help raise fund for the choral group in their stint to South Korea. This made it possible for the province to provide P1 million to help defray travel expenses.

The group plans to join other international competitions specifically in China in 2010 and the United States in 2011. (PIO/PIA Pangasinan) 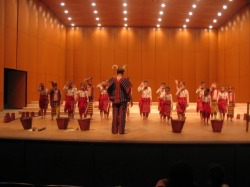 Indeed it was sweet victory for the Calasiao Children's Chorus as they went home to bring not only 1 gold medal but two gold medals  from the recently concluded World Choir Championships 2009, held last July 6-12, 2009 at Nyeongnam Province South Korea. The group emerged as over all winner in the recently concluded 1st Korean International Open Choir Competition, under the Folklore Category. This qualified them to join the 1st Grand Prix of Choral Music where they were awarded a goldren certificate and another gold medal. Although the Grand Prix Champion under the Folklore Category was  was awarded to a Korean chorale group, the children are very happy that they were able to qualify in the Grand Prix, as to be competing with world's best choir is already a great honor for them. 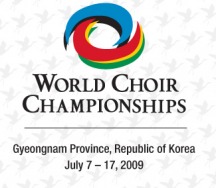 The Calasiao Children's Chorus is set to compete in the First Korean International Choir Competition to be held in Gyeongnam, Korea on July 7-17,2009.  This competition is open to all choirs of the world, regardless of their nationality and present level of artistic achievement. What makes this event more exciting is that the best choir  from this competition (those who garner a Gold Diploma) will have the opportunity to qualify  for the Grand Prix of Choral Music.This time all top choirs all over the world will compete and  the best choir of the given category will be awarded the title the “Champion of the Grand Prix of Choral Music”. 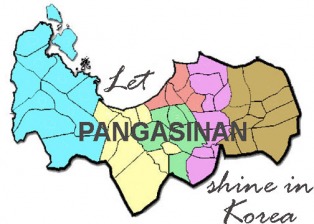 " All great things start
with a great ambition"

This is the choir's slogan as they prepare themselves for the competition in Korea. Joining  an international choral competition entails two things first, the determination to win coupled by a rigid vocal training and second, a fund raising campaign. The first requirement has already been taken cared of by the children, however the second requirement requires the work of many helping hands.

How you could help